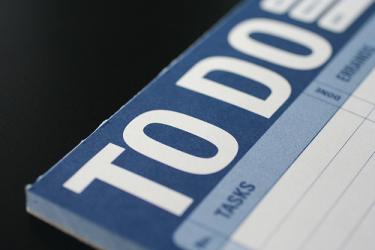 A.W. Tozer once gave an illustration that demonstrated the faith we need to have in our Father God. He said, “To be unafraid when going on a journey with his father, the child need not be able to imagine events; he need but know the father! Jesus Christ is our all in all – we need but trust Him and He will take care of the rest.” We don’t always know where life is taking us. In fact, we rarely do. Our mission is to keep following in the footsteps of Christ. As long as we do that, we know we are on the right road because the right road is always the one on which we find Jesus.

We need only look to Scripture to find great examples of those who followed God even though they had no idea where the road was leading. When God called Moses from the burning bush, he had been a shepherd for the past forty years. He was a leader of sheep, a species that is not known to be the brightest of mammals. Now God was telling him to lead a huge multitude of people out of captivity and into a land where they would establish a new nation. He was old, settled in his ways, and probably thinking of retirement. Without a doubt he probably was wondering if God had gotten the right address when He showed up in the bush. After some convincing and labor, Moses surrendered to the apparent insanity and trusted that God would take care of the details. As a result, we are still studying the leadership of Moses several thousand years later.

Noah and his entire generation had probably never even seen a gentle rain. He lived in the middle of a desert as a quiet and humble man. What must have he been thinking when God told him to prepare for an epic flood, to build a giant boat, and to take all kinds of creatures and critters aboard with him? The Bible doesn’t detail much of Noah’s response, but I have to believe there was some back and forth between them. Noah was a man of great faith, but surely this caused a moment or two of questioning. Regardless, Noah set aside his bewilderment and wonder. He did everything he was instructed to do and left the rest to God. You and I are alive today because Noah trusted God with the improbable details.

There will come a time in all of our lives when God asks us to do something that makes no sense on the surface. Maybe it’s giving away money you think you need, quitting a job, or ending a relationship. Maybe it’s opening your home or heart to someone in need. Know that your Father is trustworthy regardless of the appearance or circumstance. We don’t need to see the end of the road or the destination of the journey. We need only trust Him and follow. Have faith and leave the details to God.