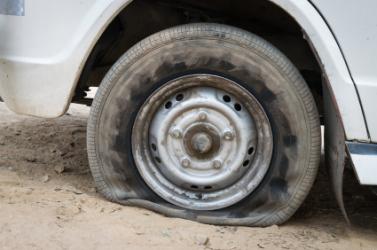 Keith Green once said that, “This generation of believers is responsible for this generation of souls.” I would also argue that this generation of believers is responsible for modeling how to live for Jesus to the generation that is following us. I saw this displayed beautifully today. A single mother of five children had her tire blow out on a busy freeway. Because her spare tire was flat, she ended up walking miles (literally) to get to a phone, where she reached out to a pastor and his wife with whom she was acquainted. She needed help, and she needed a friend.

The pastor had a full day of meetings and hospital visits already planned. He certainly could have called in a favor from a friend, or referred her to a mechanic somewhere. In other words, he could have acted like the priest and the Levite in the familiar story of “The Good Samaritan” (Luke 10:25-37). He could have considered the situation and simply passed on by. But that’s not what happened.

The pastor happened to own the same model of minivan as the single mom. This would be what non-Christians call a “coincidence”. It’s what I call a miracle. While waiting for the pastor to arrive home, his wife went into the garage and figured out how to jack up the van so she would be prepared when they got up on the highway to change the tire. Then they took the spare tire from their own van, picked up the single mom, drove her back to her vehicle, changed her tire, and sent her on her way to pick up her kids. This is a beautiful picture of the people of God living their life in the way He intended us to live.

Oh, I forgot to mention a couple of facts. It was bitter cold, with wind chills less than 20 degrees. It was also lightly snowing. Here’s the best part: the pastor just happens to be 77 years old, and his wife is 74. There were a thousand excuses they could have made, but they chose instead to serve someone in need. They chose to look like Jesus. I know all this because that pastor and his wife happen to be my parents, and I could not be more proud or more humbled. What an amazing way to model what it looks like to follow Jesus to a single mom and to their married son.

It is our responsibility to demonstrate Jesus to those who are coming behind us. It is our duty to serve others whenever a need arises. We are to always place the needs of others above our own. Yet so often we are reluctant and simply too selfish to act. But on this day at least, the Kingdom saw a victory in the form of two unselfish servants who chose to put the desperation of another ahead of the urgency of their plans. This is what we should all strive to achieve every day. Take the time to notice what’s going on around you. See a need, and respond. Take action in the name of Jesus. This is the Kingdom at its best.