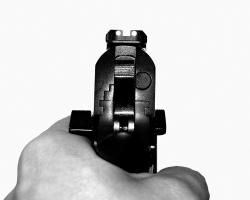 I’ve been reading John Howard Yoder’s little book entitled, “What Would You Do?” which deals with the philosophical question of what would you do if someone were threatening your spouse or child. It’s always been a difficult question for me to think through, as it is for most followers of Christ. To start with, I’m a jumble of contradictions when it comes to violence. As an American citizen, I believe in the individual right to bear arms as written in our Constitution. I own multiple guns and am a card carrying NRA member. Yet I’m anti-war and anti-hunting. I’m very much for animal rights and a massive lover of all of God’s creation. I suppose you could say that I own guns in hopes I never have to use them. Still, I’ve worked to become a very accurate shot should the need ever arise. It’s a dichotomy I’ve never really been able to unravel.

Your beliefs about gun ownership or animal rights may differ widely from mine, and that’s okay; those things are not the point of this post. The question is whether or not it is acceptable for a follower of Jesus to take the life of another human being for the purposes of protecting their own family. I wish I could tell you I know what I would do if placed in that situation. My gut instinct is that I would react as most of us would; I would invoke my role of protector and use whatever force necessary to make certain no harm came to my family. I also wish that I could tell you that this response is consistent with the teaching of Christ, but I am becoming more and more convinced that it is not.

Jesus is our example for how we strive to live our lives, so we must look to how e handled the situation when His life was threatened. Although He could have acted with the certainty of overcoming those who were persecuting Him, He chose to not invoke that power. He didn’t even make a case for His innocence but rather simply allowed those who were intent on evil to carry out their plan. Even as He neared death He prayed for the forgiveness of the very ones who were killing Him (Luke 23:32-34). In His last hours He was still reaching out to those who would believe in Him (Luke 23:39-43). Jesus did not counter violence with violence. He chose to be physically passive but remained spiritually active and engaged. This is our model, and it is one that most of us probably find a little uncomfortable. The implications for our own lives are obvious and not the path we would necessarily choose.

When we elect to kill someone in order to prevent them from killing another, we are placing ourselves in the position of judge. We do not know what the future holds for either the attacker or the potential victim. Our mission is to bring the love of Christ to all people and to lead them to Jesus Christ. If we take the life of another, regardless of the reason, we have now forever closed the possibility of reaching them with the Gospel of Christ. In other words, we are not following orders and have wandered off mission. This is not the place a follower of Jesus should ever want to be.

The question is complex and certainly cannot be answered in the brief space allotted here. Still, it bears our attention, and I encourage all of us to spend some time in prayer seeking the wisdom of God in this matter. I pray none of us ever have to answer the “What would you do if…” question in reality. However, preparing for the situation, even hypothetically, will help us to understand the character of God and the mission of Jesus at a much deeper level. I encourage you to check out Yoder’s book; it’s short and very compelling, though definitely a bit heavy on the philosophical side. Above all, take up this matter in prayer and see what God reveals to you. We may not like the answer, but the goal is to look more like Him every day. We mustn’t be afraid to ask the tough questions.

Question: What would you do if your family was threatened? How is your answer consistent with the teaching of Jesus? You can share your comments with others below.