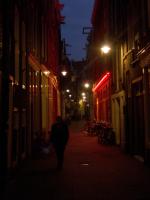 My wife and I were out recently with another couple who brought up the topic of human trafficking. They were asking about the problem and where it was most prevalent. As I began to answer the questions and reveal some statistics, one of them brought the conversation to a quick close. She said whenever she see’s reports about trafficking on television, she just closes her eyes and turns away because it is too disgusting and horrible to even think about. For too many, this is the default response. Even among those who profess to be Christians, it is far easier to cover our eyes than to look at some of the horrors of this world.

As followers of Christ we must not turn away from those in need regardless of how revolting the circumstances may be. The darker and more despicable the situation, the greater the need there is for the light and love of Jesus. We must be the ones who shine that light, not the ones covering our eyes. The plain facts are horrifying and should move us to action in seeking justice and freedom for those involved in this trade:

The statistics are numbing; I could go on, but I’m sure you get the picture. Every single person involved in trafficking is a unique and beautiful creation of God. They all have unsurpassable worth in His eyes. In Luke 15:3-7 we read how the Shepherd will leave his entire flock to go and seek the one who is lost. We know from reading the Bible and learning about the character of Christ that He weeps and aches for these victims of senseless violence and abuse. Instead of mobilizing and doing something about the problem, instead of being the hands and feet of Jesus in the midst of their suffering, we find it easier to simply cover our eyes.

What will we say to Jesus when we meet Him and He asks what we did to alleviate the pain and agony of the helpless that had no voice? The followers of Jesus bear the responsibility of seeking out those who are lost, sick, exploited, tortured and stolen from their homes. We are called to bring justice to break the chains of oppression and to set the prisoner free (Isaiah 58:6). Jesus never shied away from confronting the evil in His day; neither can we turn a blind eye to what is happening in our world. We are the light of the world (Matthew 5:14-16) and we must shine brightly into the darkest, most vile places on the planet.

It would be easy to read this post and quickly dismiss it as tragic but not something you care to think about, much less take action against. This is what Satan wants you to do. He wants to convince you that it is too horrible, too big of a problem for you to solve. And so you may choose to simply cover your eyes. But Jesus calls us to a different way. Jesus tells us that we must reach out and take the hand of the one in need, even if it costs us our very life. He was not afraid to give His life so that we might live. How can we follow Him if we are not willing to do the same? Don’t turn away from the battle when the scene gets ugly or the road gets hard. Don’t turn away from those who God loves and who desperately need our help. Human trafficking is a solvable problem and an evil that must be stopped. This is a crisis of our generation, and it is up to us to respond in the way that Jesus would. We must fight; we cannot cover our eyes.