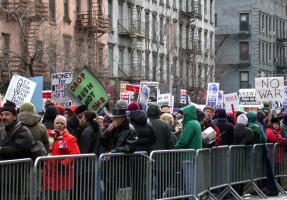 Recently the faith fellowship I attend was visited by a well-known group of picketers and protesters. What they were protesting no one seems to be quite certain, so perhaps a large group of believers just happened to be a convenient pit stop on their way downtown to picket outside of the Super Bowl. I have been told that this particular group is made up of several lawyers and that one of their specialties is to create encounters over which they can sue the other party. With that in mind, the attendees were told the best way to deal with them was simply to not engage them. Given their history, it seemed like wise advice.

As I reflected on the events of the day, I became increasingly bothered by the policy of “do not engage”. It occurred to me that this has become the modus operandi for much of the modern church. While megachurches stake out prime real estate in the suburbs, our inner cities spiral further into hopelessness and decay. The Church is America has worked very hard to insulate itself from the world. We boycott stores that don’t say “Merry Christmas” and refuse to be seen in bars or establishments that might cause someone else to question our finely honed image.

Down the street and across the world, people are hungry and struggling with poverty. Yet we as the Church seem to be operating under the orders of “Do not engage”. Young women are being exploited and sold throughout this world as sexual slaves, but attempting to intervene could place us in great danger. Our safer solution is to shake our heads but ultimately decide to not engage the situation.  Teenagers are enticed and recruited to join local gangs to find a sense of purpose and fulfillment; meanwhile those of us who know the only true source of meaning dare not share our hope with them. To do so would be at our own peril, so we again fall back on the wisdom of “do not engage”.

What has happened to us? What have we become? In the Bible we read of those who were unafraid to stand up for their beliefs regardless of the consequence. Daniel faced a room full of lions; Shadrach, Meshach and Abednego chilled out in a sweltering furnace; Paul endured repeated beatings, stoning’s and shipwreck all for the purpose of furthering the message of Jesus to others. These people of God were not afraid to engage those who did not know Him, regardless of the circumstances. They did not consider their own safety or comfort; they simply chose to follow God whatever the cost.

We have to change. If we do not engage the lost in the world then who will do it? We are the hands and feet of Jesus. Unengaged hands and feet are useless! I propose that we begin to live by the mantra of “Always engage”. The apostle Paul wrote that we should be persistent in sharing the Gospel of Christ, even when it is perhaps inconvenient (2 Timothy 4:2). Jesus did not fail to engage the crowds when He walked on the earth; He did not fail to engage the sick, the poor or the powerful. Instead, Jesus lived His life fully engaged, unafraid and unashamed to proclaim the love and mercy of His Father. As followers of Jesus, we are called to do the same.  We mustn’t be afraid because the Spirit of the living God lives within us.  It’s time to break out of our comfort zones and go engage the world for the glory of God.