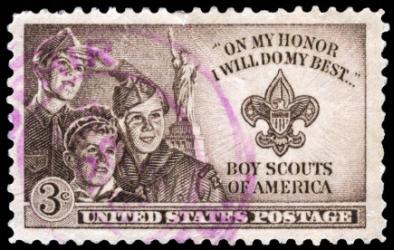 Recently several churches in my area have been dropping their sponsorship of Boy Scout troops. My own church home has made headlines because of their decision to follow suit. At issue is the recent decision by the Boy Scouts of America to allow homosexual boys to join their ranks, something that has previously been forbidden. The churches that are pulling their support from the scouts are doing so ostensibly so they are not financially supporting or associated with a group that allows homosexuals to benefit from their funding. Upon learning of my home church’s decision, I took an afternoon to think and pray about this stance. I’d like to share my thoughts with you.

First a couple of disclaimers; I was never a Boy Scout and have no affiliation with them whatsoever. I am a happily married heterosexual male and have no particular affinity to homosexual causes. Finally, I confess that I watch as little news as possible, so I may be missing some of the finer points of this story. However, I cannot help but be disgusted when those who claim to be followers of Jesus do things in direct opposition to the example He set for us.

Instead of promoting an atmosphere of love and acceptance to those struggling with sin, we cast them out and want no association with them. Apparently we are only uncomfortable with certain sins, and others get a pass. Why was it okay to support the Boy Scouts when they allowed greedy, lustful, dishonest, covetous, and idolatrous boys to join? Why was it acceptable to lend the church’s money to support those sins but homosexuality is deemed unacceptable? The church at large has become far too comfortable in its own sins. We revel in pointing out specks in the eyes of others while we walk around with two by fours embedded in our own eyes (Matthew 7:3-5).

Would the modern church have stepped up to throw the first stone at the woman caught in adultery (John 8:2-11)? Apparently we do not see our own sin as being equal with those of another. If a particular sin is not a problem for you, it doesn’t make it viler than the ones with which you are inflicted. We piously proclaim we are taking a stand for God while refusing to admit we have forsaken His mission for years. Like the Pharisees of old, we have become more concerned with outward appearances than favoring justice and mercy (Matthew 23:23).

The Boy Scouts of America allowing homosexuals into their ranks is not the problem. Sin is the problem and that includes all sins, not just the ones we select. How sad that we have set ourselves up as the judges of people who desperately need to experience the love of Jesus. We aren’t drawing people to Him, we are pushing them away. Even worse, we are building walls to make certain they feel ostracized and can never come in. God forgive us when our piety overshadows His mercy. It’s time we started doing what Jesus told us to do and stop our pathetic efforts of trying to play God. Jesus died for all, loves all, and forgives all. We should do the same.

Get the latest posts right in your inbox! Just enter your first name and email address below: