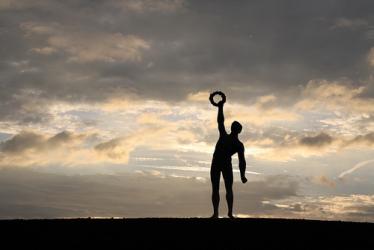 We spend so much of our lives living in defeat, never remembering that Christ has already won the victory for us. We get tired of fighting the battles and give up without ever realizing that the battle was over before it even started. Imagine an army too tired to fight another battle. Suddenly they are informed the enemy has surrendered. Instead of marching in and securing the victory, they remain wallowing in their fatigue and let their opponent know that instead of declaring victory, they are going to concede defeat because they’re just too tired to go on. It’s a ridiculous scenario, but it is the way many followers of Jesus are living their lives every day.

Jesus told His followers that while they would endure suffering in their lives, they should be encouraged because He has already conquered everything the world might throw at them (John 16:33). Jesus has already won every battle for us. Satan hates this fact and does everything he can to obscure it from our minds. He sends doubt, fear, pain, sickness, persecution, job loss, relationship difficulties, natural disasters, and anything else he can come up with to discourage us and make us forget that Jesus Christ has already won the victory. No matter what life throws at you, Jesus has overcome it.

As long as Satan can convince you that victory in your situation is in doubt, he can keep you from following and serving Jesus. This, after all, is his main goal. Satan lives to keep people from turning to God. He doesn’t care what it takes or how much pain he has to inflict on your life; as long as he can get you to take your eyes off Jesus, he is satisfied. He knows he’s lost. He knows he’s defeated. The only problem is that he is also delusional. Satan thinks if he can get you to doubt your victory that he might somehow claim it for himself.

The trials we face in life are very real. As long as sin remains in the world, we will all have pain in our lives. Things won’t go how we planned, and we may even feel despondent at times. That’s when we must remember that Jesus has already won the victory. No matter what gets hurled into our path, Jesus has already sealed us as His own. There is no power or circumstance in life that is great enough to rip us from His hands (John 10:28-29).

In times of struggle, it may be difficult to remember that Jesus is walking with us through whatever we are facing. He will never waver and He will never let go. We simply must lean on Him for strength. We can’t do this on our own, and Jesus never asked that we would. Instead, He said that He would always be with us until the very end of time itself (Matthew 28:19-20). The battle isn’t ours to win. Christ already took care of that when He defeated death itself. Our only job is to keep our eyes on Jesus and be obedient to Him. He’ll take care of the rest.