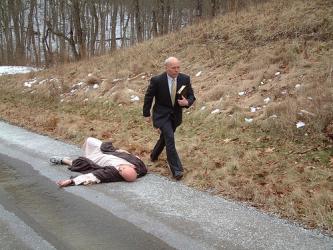 I was recently driving on a Sunday afternoon when I noticed a car stopped on the opposite side of the road with its hazard lights on. An older woman was in the driver’s seat, looking not overly concerned. As the vehicle was a newer BMW convertible and my quick glance at the driver told me she was well dressed, I assumed she was Realtor and had simply pulled over to check her directions. I allowed that rationalization to satisfy the pull I was feeling to turn around and see if she needed assistance. As I have done an embarrassingly number of times in my life, I reasoned that since I know next to nothing about the workings of automobiles, I would be of little help anyway.

As I continued on my drive home, I thought about how the woman could easily knock on any door in the neighborhoods on either side of the road where she was stopped. Besides, almost everyone has a cell phone these days, so I assumed help was already on the way. Before coming upon the woman in the car, I had seen two gentlemen, who I surmised by their attire to be Sikhs, walking up the road. As I continued to rationalize I thought surely they would help the woman as soon as they came upon her. And that is when God stopped gently prodding me and landed a right hook across my jaw. “Just like the good Samaritan”, I heard Him say. I was just like the priest and the Levite who had passed by on the other side of the road without bothering to stop and help the person in need (Luke 10:25-37). I was relying on those who do not know Jesus to do the job Christ gave me to do.

I turned around and began heading back towards the woman. Batting away the shame I felt only moments earlier, I heard God tell me, “You are becoming more like Me.” I replied that if I were truly becoming more like Him, I would have stopped in the first place without driving by. God’s response was priceless and made me laugh out loud. His response was, “I said you are becoming like Me, not that you have become Me!”

How many opportunities do we have to be the Good Samaritan each day and walk on by instead? We should never leave our mission to be done by someone else. God will indeed use whoever is willing to accomplish His purposes on earth. How sad that so often it is we who are the chosen that are the least willing to be used. I’m not proud of driving by the woman, any more than I am of the fact that I went back to help (She was fine by the way, just talking to her sister on the phone). The lesson I learned, however, was invaluable. Not only was God gracious in the midst of my disobedience, He even cared enough to make me laugh once I decided to obey. Nothing compares to following Jesus and obeying His commands. He can turn your shame into joy, if only you follow Him.