The Presidential election in the United States is winding down to its final couple of weeks. It’s difficult to look at a newspaper or a website without being bombarded with headlines of “Trump or Hillary”. Certainly I have friends and family with strong opinions on both sides of the question. I have my own preference and sometimes even a feeling of dread if the contest should swing one way rather than the other. 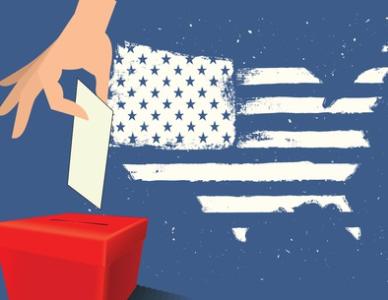 I was praying about this and came away with a renewed and refreshed outlook on the election results. At the end of the day, the Trump or Hillary question shouldn’t matter at all to disciples of Jesus. Our allegiance is to Jesus and His Kingdom, not to any flag or Country.

I’ve heard people on both sides of the Trump or Hillary debate say they will leave the country if the other side wins. That’s the prerogative of every American citizen. If the election so impacts their life (and I would probably argue the point), then by all means leave. Move. Go somewhere you feel better reflects your values. I would however caution you with same advice Keith Green gave over thirty years ago: “You can run to the end of the highway and still not find what you’re looking for.” If your goal is to live in a Country more reflective of your values and principles, you will always be disappointed. You are chasing after something fleeting and transient.

I’m sorry to break it to you, but there’s no such thing as a Christian nation. It is a contradiction in terms. Jesus didn’t come to form a political or religious movement. He came to bring sight to the blind and life to the dying. Jesus made it clear He wanted nothing to do with politics. He had a higher purpose. He was building the Kingdom of God and invites each of us to do the same. Politics is a manmade institution. It’s the way humans utilize pride and selfishness to affect the course of history. You don’t have to listen long to the rhetoric of politicians to recognize most of them have their own interests at heart. Politicians aren’t interested in building the Kingdom of God. They are interested in building the kingdoms of man.

Allowing yourself to get tied in knots over the Trump or Hillary debate is to lose focus on the mission Jesus has given you. We are to bring love, grace, and mercy into the world around us. We are to accurately reflect the character of Christ. During our time on earth, our mission is to build the Kingdom of Heaven, to model what the love of Jesus looks like and can do in the lives of people who do not yet know Him.

It’s difficult to break years of conditioned behavior, but disciples of Jesus shouldn’t care if the next President is Donald Trump or Hillary Clinton. We should only be concerned with whether or not we are living out the life Jesus designed for us to live. Who is in the White House doesn’t affect our ability to look like Jesus. Let’s get our eyes off the temporal and transient and shift our focus back to the eternal King. The morning after the election, it won’t matter if the winner is Trump or Hillary. All that matters is what you will do with Jesus on that day and for the rest of your life.