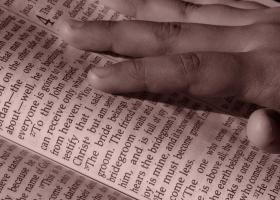 You might look at the title of this post and wonder how I could ask such an obvious question. I think we all have a concept of what it means to believe something. The dictionary defines ‘believe’ as “to accept something as true”. So if we accept that Jesus is the Son of God then it could be said that we believe in Him. But the more I study and learn about what the Bible teaches, I think the word “believe” means so much more. In the pages of Scripture, belief is always accompanied by action as if one could not be separated from the other.

In the Old Testament, God required more than an acceptance of His existence. If Abraham had not left His home country and followed God to a foreign land, I wonder if God would have called him His friend and credited his faith to him as righteousness (James 2:22-23). It seems that for Abraham, belief in God was not something He could simply state and then sit at home pondering. No, his belief prompted him to act in obedience to what God told him to do.

In the New Testament, Jesus also required more than lip service belief. He told His followers that if they did not do the things He commanded then He would deny them before His Father and refuse them entrance into Heaven (Matthew 25:31-46; Matthew 10:33). He told those who were chasing after Him that unless they left everything behind for His sake, they could not be considered His followers (Luke 18:18-23; Luke 9:57-62). These people obviously accepted what Jesus was saying to be true, or else why were they following Him from town to town? Again, Biblical belief seems to be something more than just an intellectual agreement; it must be accompanied by an action taken on behalf of that belief.

To truly believe in Jesus then requires faith plus movement. Perhaps that is the better definition of belief. To believe in something requires not just a mental acceptance that it is true, but also a physical demonstration of that truth. I recently read that in the New Testament, Jesus said to “believe” in Him about five times, but there were twenty instances where He said to “follow” Him. Belief by our modern definition is quite passive, while following requires action. It seems that when Jesus was calling people to come after Him, He was implying that there would be movement required to accomplish this. You can’t separate the following from the belief; you cannot separate the action from the faith. As James puts it, “Faith without works is useless!” (James 2:14-26)

Believing in Christ takes more than a mental acknowledgement that He is the Son of God. It takes more than an intellectual understanding that he died on the cross to forgive you of your sins. All this is required, but it must be accompanied by doing the things He told us to do; it must be paired with a physical demonstration of His love towards others. If we believe in Jesus, then we will be eager to serve those in need; we will gladly leave everything behind in order to pursue Him. Believing in Jesus is more than a simple acknowledgement that He is who He says He is; it takes more than doing a few random acts of kindness. To believe in Jesus the way the scriptures teach us requires total acceptance of Jesus as the Son of God, repentance and thankfulness for His sacrifice on our behalf, and action to carry on His mission to others throughout the world. Belief is all encompassing of our mind and bodies. It is the longing of our hearts turned into the actions of our limbs. This is what it means to believe in Christ; do you believe?