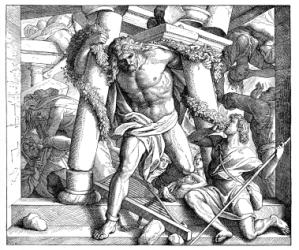 I have always been drawn to the story of Samson. Maybe growing up as a long-haired rock-n-roll guy, I liked the “no hair cut” rule of the Nazarite vow. I love how God has recorded stories about such diverse individuals that we can always find someone who resonates with us. Samson had it all. He was the strongest man in the world. Having devoted his whole life to God, he should have been one of the greatest men in history. Unfortunately, the details of Samson’s story are more often than not very sad, and ultimately, quite tragic. Instead of living out his days as a great man of God and leader of Israel, Samson squandered his blessings and ended his life as a ridiculed slave.

The demise of Samson began when he rejected God’s instructions and started associating with the wrong crowd. God had forbidden the Israelites to marry outside of their own people, yet Samson couldn’t resist the lure of a woman from another land. Despite the warnings that intermarrying with other nations would cause them to worship other gods and pursue the wickedness of those lands, apparently Samson thought he could handle it. After all, wasn’t he the strongest man in the world? Proverbs 16:18 tells us that pride comes before destruction, and this was demonstrated vividly in the life of Samson.

Another decision that led to Samson’s downfall was that he allowed himself to be worn down by ungodly requests. Time and again Delilah would plead with him to tell her the secret of his strength. Instead of standing strong in his faith, Samson eventually relented and told Delilah of his vow to God. Because he was more concerned with pleasing Delilah than God, he gave in and betrayed his promise to God. In order to get a little earthly peace, Samson sold out His Creator. The results were devastating. God’s blessing was removed from Samson’s life, and he was relegated to spend the remainder of his days as a blinded slave.

It was not until the final day of his life that Samson repented and cried out to God to restore the blessing on his life. Samson asked out of a humble heart with the intention of avenging the name of God rather than achieving any notoriety for himself. The enemies of God had mocked His power because they had defeated His strong warrior. Samson was determined to show them God’s unequalled power once and for all. Doing so cost him his life, but through his death, God was glorified. You can read the whole story in Judges 13-16.

We can learn much from the life of Samson. The people with whom we choose to associate can have devastating effects on our lives. Make certain the company you keep does not tempt you to stray from the commands of God. Don’t let the cares of life wear you down. Momentary gains for selfish reasons always end up hurting us in the long run. Our poor choices made in haste and without seeking God’s counsel will compound into life-threatening results. Bringing God glory through all of your days is far better and more enjoyable than waiting until your final breath. Don’t waste your life or the blessings of God seeking your own selfish desires. Put God first in everything, obey His commands, and always honor the One who gave you life.