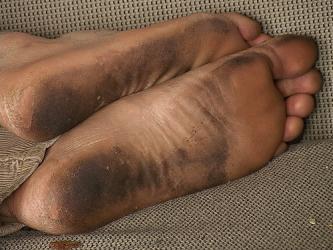 I was told of a woman in a nearby church who went to visit her husband in prison. As she was leaving, an older woman was being released. The woman being released was carrying a sack with a little bit of clothing and, inexplicably to me, had no shoes. A little later in the morning, the woman from the church encountered this same older woman in a McDonalds. Instead of simply getting her food and leaving, the woman from the church went and sat down with the older woman and they talked for awhile. Before leaving, the church woman gave the older woman the shoes off her own feet. I don’t have any further details, but I found the wholly unselfish actions and love demonstrated to a complete stranger both moving and inspiring.

How many God-ordained moments do we let slip by us each day? How many people in need continue to be hungry, thirsty, or homeless because we can’t be bothered or simply choose not to get involved? Would you or I have acted the same as the church woman, or would we have simply said a prayer and hoped God would send some help her way? I love the way Matthew West puts it in his song, “Do Something”:

“I said God why don’t you do something?
He said I did… I created you!”

Shane Claiborne wrote extensively on this topic in his book, “Becoming the Answer to our Prayers”. Prayer is incredibly powerful, but there are times when you and I must get out of our seats, take some action, and do something.

When Jesus was on earth, He didn’t walk around just praying for people. He also took action. He touched the untouchable, loved the unlovable, and hung out with outcasts. If we are going to live a life that looks like Jesus, we are going to have to throw ourselves into the middle of some uncomfortable situations. In many circumstances, God has already equipped you to be the answer to the prayer that has hardly yet formed on your lips.

The key here is availability. When we commit ourselves to be available to further the mission of Christ, God will direct our feet into times and places where we can impact the life of another. At that point we must be prepared and willing to be used regardless of our trepidations. Love casts out fear (1 John 4:18), so our hesitations can be quickly won over by allowing God’s love to flow through us and into the life of another.

We are to be the hands and feet of Jesus. Sometimes this means we might have to give our shoes to a complete stranger. Sometimes it may be the coat off your back on a cold winter’s day. We need to be available to be used, and just as importantly, willing to actually follow through and do something. Instead of just praying, how about asking God if you could have the privilege of actually participating in the answer to your prayer? The next time you see someone without shoes, why not give them yours?